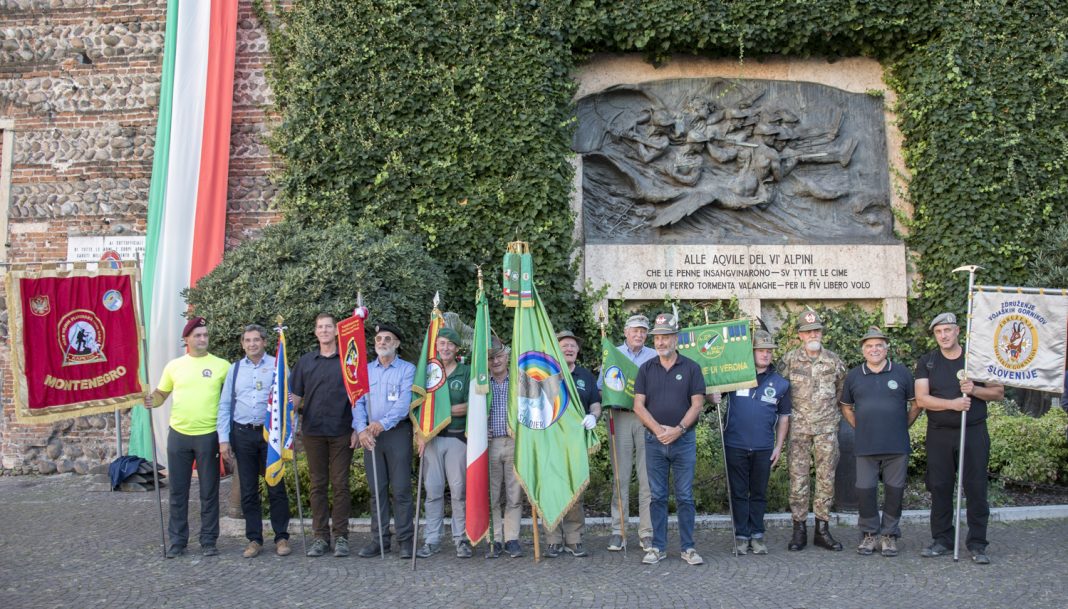 In the enchanting thousand year old city of Verona, built in a bend of the river Adige, known to be the place of Romeo and Juliet and for the Roman historical amphitheater, rich in architecture, recognized to be a UNESCO heritage, as “William Shakaspare” said : “…there is no world outside the walls of Verona”.

Upon request both of Secretary General of the International Federation of Mountain Soldiers Brig Gen. Renato Genovese and Mario Rumo, President of the IFMS Commission ANA, they proposed to the President of the ANA Section of Verona, Luciano Bertagnoli and to his Council, the availability for the organization of the 33rd Congress of the Federation in the city of Verona, a proposal immediately accepted with enthusiasm by the Verona Section which, in a short time, managed to organize a large program for the meeting, mastering moments of congress work and finding time to introduce the image of the city and the province of Verona, an image widely shared by the participants, both for the historical and iconographic documents presented, such as the visit to the “Caserma Duca” barracks headquarters of the 4th Ranger, the Deposition in Piazza Bra of the crown at the Plate of the 6th Alpini. Furthermore, involving and demonstrating the potential of the Alpine groups Colognola Ai Colli, Malcesine, Chievo, Peschiera Del Garda and S. Massimo, which enthusiastically demonstrated their “alpine” essence hosted in their group locations, with an addictive enthusiasm shared by all participants.

On Wednesday early morning, September 26th, at the prestigious Palazzo Carli headquarters of the Armed and Divisional Command, participants were received with courtesy by the General Commanders of the Army Operation Support Center; in the courtyard of the building in front of the internal facade adorned with rusticated arches and Doric pillars, at the presence of the ANA National President, Sebastiano Favero, Institutional Authorities, High Officers, the delegations of the Federated Associations of Austria, Germany, Italy, Montenegro, Poland, Slovenia, Spain, Switzerland, USA, Bulgaria and President Luciano Bertagnoli with his Alpine groups. At 9.00 am the banner of the Federation, accompanied by Secretary General B.G. Genovese opened the ceremony of the congress, followed by the Italian flag raising and by the official speech of President Favero and then the work of the Committee was declared open.

This was pursued by the transfer to the Officers Club in Castel Vecchio, where the exhibition representing the history of the Federation founded in 1985 was commissioned by the ANA Advisor Mario Penati.

With a program illustrated by the Secretary of the Federation to the Presidents and Secretaries, the first meeting of the congress began, to then continue with two other meetings, one at the ANA Section of Verona and the second at the Domus Mercatorum Auditorium of the Chamber of Commerce; the works were first meant to unite all federated associations in particular discussing about their opinions, the national IFMS commission of the Italian Alpine Association, shortly and without imposing anything, felt to illustrate a proposal to make in each adhering nation, greater knowledge and the importance of a set of federated associations that have the mountain as their operational terrain, removing from it the spirit of aggregation that permeates the sense of duty towards the people and territory that it imposes.

Substantially the Alpini argue that it would be useful to establish a prize for students or classes that take into consideration the care of the territory, the knowledge of historical military departments, places related to armed and social events. They believe it is not difficult to reward those among the selected by each nation, to be chosen as the best. Keeping together all the importance and the spirit to shape that extraordinary wealth of views in order to transmit that heritage of experience to young people, to bring into the life of each association in respect of traditions that every association has for the common good. This first exit, if accepted, wants to be an invitation for a series of proposals that each association will feel to advance through the General Secretariat. To open these significant and shared opinions, further future meetings have been planned.

Furthermore, the 2019 Congress in Poland was approved to be placed in “Polanica Zdròj”, and a ceremony was then held for the certificate of merit, which is handed to those who have contributed in the understanding between nations, to the development of peace, to the defense of the soldierly spirit among mountain troops, in respect of the mountain and statutory traditions.

For the Italian ANA Commission, the prize was assigned to the Alpine Peter Antonio Moretti of the IFMS working group of the Bergamo Section.

On Saturday 29th evening, at the Club Officers in Castel Vecchio, participants all gathered for a convivial Gala dinner to strengthen the friendship in the federation, leaving with serenity convinced that they had shared a very intense congress, with days that will remain fixed in memories because, contrary to a widespread belief, the soldiers of the mountain and not only, in arms or on leave, consider themselves to be absolutely valuable both substantially and culturally.